As long as history has been recorded, journeying through the skies has been an aspiration of humankind. Today, exploring air and space is not just a dream; it’s a reality, and technology and ingenuity create more opportunities every year. As anyone in the aerospace industry knows, the sky is not the limit are endless technological avenues to test and examine.

The aerospace industry continually evolves, moving faster than ever in this age of artificial intelligence and virtual reality. In recent years, numerous engineering trends have emerged, tearing down some of the boundaries between human aspiration and achievement.

Advancement in the forging industry’s technology and efficiency has a direct effect on aerospace engineering. Forging has become the most cost-effective process to produce the high-quality metal components needed by the aerospace industry. All parts used for aerospace applications need to withstand highly corrosive environments and extreme temperatures.

For example, newer aircraft require lighter components with more precise specifications. Only through state-of-the-art forging techniques can companies produce the components for aircraft that can safely handle stress, tension, and heat fluctuation. To meet these needs, many forging companies have studied databased to increase their productivity.

As aircraft technology has become more sophisticated, so has aircraft maintenance. Operational efficiency has quickly evolved thanks to the implementation of automated scanning, virtual reality, and predictive maintenance. 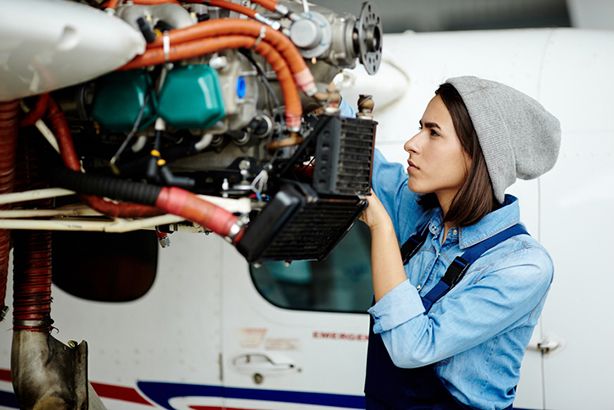 For example, aircraft systems and satellite datalink coverage allows the communication of 400,000 separate touchpoints in real-time. By gathering this data and performing complex data analytics, aerospace industry data scientists now have a better understanding of the precise areas that frequently need repair or replacement. They can also identify the optimal time for intervention for each issue. This technology promotes safety and prevents losses and also allows technicians to dedicate their time to other needed endeavors.

In recent years, 3D printing has become a manufacturing solution for companies across diverse industries. This trend has found its way to the aerospace industry as well. When it comes to aircraft, the biggest expenses are product research and development. 3D printing can significantly reduce the R&D time needed and related costs.

3D printing is also used as a faster, less expensive, and lighter alternative for the maintenance of aircraft. Parts requiring regular replacement, such as door handles or tools used in the creation of various aircraft parts, can be printed quickly at a lower cost. These items also weigh less when 3D printed.

Dr. Hao Huang, the Technology Chief of GE Aviation Electrical Power, wrote for the Institute of Electrical and Electronics Engineers and stated that most recent MEA developments “have been mainly focused in the area of the secondary energy sources, i.e. replacing the pneumatic or hydraulic system with an electric on.” However, he believes that in the near future, “the turbo engines will become a hybrid of turbo and electric, opening up a new channel to drastically improve engine fuel economy.”

Read more  How is Chemical Engineering Different from Chemistry?

Huang also mentioned that small, electrically-driven aircraft have shown promise, although with limited passenger capabilities. Future developments may allow manufacturers to increase the number of seats on such aircraft.

Though the total elimination of fossil fuels in aerospace technology remains a lofty goal, many firms have committed to using as little fossil fuel as possible. Movement toward more fuel-efficient aircraft has begun with incremental approaches such as the integration of current equipment with newer components.

Automation is a growing trend in many industries, and aerospace engineering is no exception. Moving beyond drones and self-driving cars, the aerospace industry strives to launch human-free flights.

Existing aircraft autopilots can fly from takeoff to landing. However, the most significant impediment to autonomous flight is figuring out how to ensure safety during unusual situations. The ingenuity and emergency response of a human pilot is still needed in events that disrupt flight performance, such as ice storms, unexpected traffic, or conflicting data.

Although still several years and many challenges away from fruition, investments and innovation will continue to support the endeavor of autonomous flight. It’s expected that in the coming years, most aircraft will have only one pilot in addition to the autonomous technology.

The aerospace industry will continue to grow as engineers and other scientists keep coming up with innovative solutions. When it comes to success and competition within the industry, companies will have to partner with reliable subcontractors, incorporate the newest materials, and quickly implement emerging technologies to stay ahead of the crowd.