Can You Answer Thomas Edison’s Intelligence Test For Job Seekers?

Tech companies nowadays are pretty known for asking weird questions during job interviews (I know I’m not the only one). They’ll ask things like “How do I move to South Korea?” or “What is the likelihood of me surviving a hike to Mount Everest?”

But the questions these tech companies are nothing compared to the exhausting Thomas Edison’s test for potential employees. It was filled with trivia questions that has not much to do with any job under Edison. Honestly I don’t even think it has anything to do with any job now unless you’re a Geographer or probably a Historian. But back in the spring of 1921 when the questions were leaked by 2 applicants with seemingly amazing memory (there are 146 questions, if you didn’t know already) and has been published in the Times Magazine (yes, it existed that long ago), it became the talk of the country.

The test was actually, well, quite difficult to pass, that even Albert Einstein was said to have “failed” it for not knowing the speed of sound at the top of his head. Even Edison’s youngest son Theodore, who was a student at MIT, didn’t do well in the test. In Edison’s biography, however, the elder Edison assured his son he had guaranteed employment anyway.

Ironically, Edison had apparently created the test because he was sick and tired with college-educated applicants looking for work but not having the proper knowledge. Or you know, he could’ve just been bored and wanted to use this test to mess with people as a form of personal entertainment. Who knows?

Want to try this test out for yourself? Sure, go ahead. Keep in mind though that you have to answer these questions as if you were living in 1921, which is a struggle probably even for Google. The answers are also below as they were written in the New York Times, so good luck! The answers are here as well, so don’t fret. 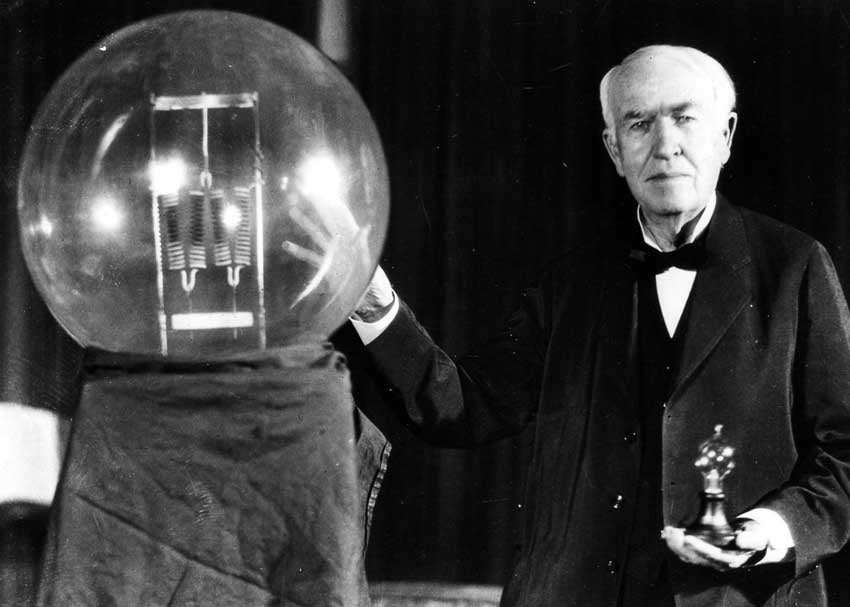 Sea Island cotton or Egyptian cotton, according to different experts.

St. Louis has been the raw fur centre until the month of April of the present year, when New York apparently eclipsed it. It is nip and tuck between the two cities, with New York leading. New York is incontestably the centre of fur manufacturing and retail selling.

Great Britain is so considered, but the United States is a close competitor in volume, and may even be slightly in the lead at present day.

This is a catch question. Greenland looks far bigger on the square, flat maps on Mercator’s projection, which represents the world as a cylinder, exaggerating the size of areas as they approach the poles. Australia is in reality more than three times as large as Greenland.

In the Arctic, north of Norway.

That at the Mount Wilson Observatory in California.

An English engineer. He invented a process for making steel by taking carbon out of molten iron by the air blast.

Prunes are grown in the Santa Clara Valley and elsewhere.

The Minute Man who spread the alarm of the British march on Lexington.

The first signer of the Declaration of Independence.

A Greek of the first and second centuries A.D., who wrote the Lives” and miscellaneous works.

The Carthaginian General who conquered most of Italy in the third century B.C.

A French Revolutionary orator, who was sent to the guillotine by the Committee of Terror.

An Athenian lawgiver, famous for twenty-three centuries for the remark to Croesus (which modern historians say he did not make) to “Count no man happy until he is dead.”

General Marion was a principal leader of the Revolutionary forces in the Southern States.

The Spartan General who led the heroic defense of Thermopylae.

By purchase from France.

The Spanish conqueror of Peru.

The hero of the South American wars of liberation from Spain.

A peninsula on the northeast coast of Asia.

Seventy feet in the Bay of Fundy, between Nova Scotia and New Brunswick.

In Southern California on the Mexican border, and noted for melons.

A vast tract of seaweed floating in the North Atlantic Ocean.

Three hundred and ninety-six miles by the shortest route.

Three thousand one hundred and sixty-seven and one-half nautical miles.

Montana has the largest single mine in the Anaconda. The mines of Arizona have the greatest combined output.

The major discovery was made by Robert, a Frenchman, though it is often attributed erroneously to Fourdrinier, who introduced it into England.

Mergenthaler was the first to perfect a highly practical one.

Nobody knows. Somebody in China, Japan, or Korea. Probably first invented in Europe by Lourens Janzoon Coster of Haarlem.

By immersion in an infusion of oak or hemlock bark or other material strong in tannic acid.

From cotton or wood pulp treated with acids and drawn into threads.

An enclosure to keep water from seeping or flowing into a space where engineering operations are taking place.

A base for varnish made from lac, which is resinous incrustation formed on certain trees in the East Indies by an insect resembling the cochineal.

To the inclination of the earth to the plane of the ecliptic. In the earth’s revolution around the sun, this causes the sun’s rays to be received at varying inclinations, with consequent variations of temperature.

Coal after the more volatile components have been driven from it by heat.

Off the Newfoundland Banks.

Amundsen, and then Scott.

A periodic alternating wind in the Indian Ocean.

There is a Magdalena Bay in Lower California, one in Spitzbergen and one in Colombia.

Mainly from the Smyrna region in Asia Minor, which was formerly Turkish but which since the war has become part of Greece.

From Maine and California.

In dry air at freezing it travels about 1,091 feet a second. In water its speed is about 4,680 feet per second. It traveled at 11,463 feet four inches a second through an iron bar 3,000 feet long. Sound moves at a constantly diminishing rate of speed.

Approximately 186,700 miles a second in a vacuum and slightly less through atmosphere.

She was a Queen of Egypt, a contemporary of Julius Caesar and Mark Antony and committed suicide by causing an asp to bite her.

75, Who discovered the law of gravitation?

Scheele, a Swede, discovered the principles about 1780 and Wedgwood, English, first applied them in June, 1802. Daguerre and Neipce, in France, produced the daguerretype, but Dr. John William Draper of New York University, in 1840, first improved it so as to make it practicable for taking the pictures of human beings.

A clothe made from matted wool, fur or hair, by pressure, as opposed to weaving.

No cereal is used in all parts of the world. Wheat is used most extensively, with rice and corn next.

Arkansas, Tennessee and other Southern States.

Because of a fancied resemblance of the row of channels into which the molten flows to a litter of pigs.

Cyanide of potassium, strychnine and arsenic.

Nuremburg and the Nuremburg region.

California, Georgia, Virginia and other Southern States and Southern Pennsylvania.

There are three commercial processes. (a) Chamber process: iron pyrites of sulphur roasted in special furnaces yield sulphur dioxide, which is collected in a lead chamber in the presence of water, oxygen or air and nitrous anhydride. (b) Catalytic or contact process: The raw materials, sulphur dioxide from burning sulphur or roasted iron pyrites and oxygen from the air, produce sulphur trioxide, which, when absorbed by water, gives sulphuric acid. Combination of sulphur dioxide and oxygen is carried on in the presence of a catlyzer, usually spongy platinum or iron oxide from pyrite burners. (c) Much sulphuric acid is made from waste gases of copper and zinc furnaces from ores rich in sulphur by the chamber process.

A black variety of hard rubber capable of being cut and polished, made from the cheaper grades of rubber from Borneo and Java vulcanized with much sulphur.

The fractional distillation of coal tar.

A fusion of silica, usually in the form of natural and, with two or more alkaline bases, such as soda, lime or potash.

A fine earthenware differing from china in being harder, whiter, harder to fuse and more translucent than ordinary pottery. (a) Natural porcelain: A mixture of kaolin and feldspar. (b) Artificial porcelain: Gypsum and bone ash replace the silicious materials.

“A catch question. The city of Jena in Germany, formerly produced the best lenses, but recently the Bureau of Standards in Washington has turned out lenses excelled by none.” — Dr. George F. Kunz of Tiffany & Co.

A unit of energy equal to the work done in raising one pound of avoirdupois against the force of gravity the height of one foot.

Across the Nile in Upper Egypt.

The San Joaquin River in California. The Red River of the North.

They separate Sicily from Italy.

Mount Everest in the Himalayas.

A magnificent mausoleum built at Agra, India, by the Mogul Emperor Shah Jahan in memory of his favorite wife.

A peninsula on the east coast of North America, running from St. Lawrence River to Hudson’s Bay.

John Spofford Smith wrote the music for a drinking song for the Anacreonic Club in London about 1780. Francis Scott Key wrote the words.

The principal leader of the Reformation.

The Dead Sea. It is 1,300 feet below sea level and is the most depressed accessible part of the earth’s surface.

Ash is generally used in the East and hickory in the West.

It is named after Gabriel Daniel Fahrenheit, the German physicist, who invented it.

The dried kernel of the cocoanut.

The mosquito of the genus Anopheles.

Linseed oil, with a small percentage of turpentine and liquid dryer, together with a mixture of white lead and zinc oxide.

“It is remarkable how few of the apparently well-informed know what ‘commercial glucose’ really is. This is due to the confusion of terms which associate this misnamed starch product with grape sugar and dextrose. It is quite true that dextrose (glucose) is an ingredient of commercial glucose, but the dextrose in the commercial glucose of today is the least important ingredient.” — Rogers’s Manual of Industrial Chemistry. Commercial glucose is made from crude corn starch liquor that is first converted into a liquid by being hydrolized by an acid, then neutralized by a solution of sodium carbonate, and finally filtered and evaporated in vacuum pans.

“People have not been in one place long enough to know for a certainty where it never rains. Some natives of the Sahara Desert, however, have expressed amazement when they heard that water came from the skies. Rain has been reported in regions close to the poles, but neither of the discoverers of the North and South Poles was there any length of time.” — U.S. Weather Bureau.

In the Kingdom of Hedjaz, 65 miles east of the port of Jedda on the Red Sea.

From cinnabar, the red sulphite of mercury, mined chiefly in California, Texas and Spain.

From “catgut,” now usually made from the intestines of sheep.

Basswood, at thirty pounds a cubic foot, has been called the lightest, but it has been asserted recently that balsa, or corkwood, found in South America, is the lightest.

2
Share via
1 share, 2 points
Engineer. Writer. Artist. Gamer. Musician. She dreams of building a time machine and help kittens take over the world. Is secretly the pink power ranger in real life.