What If Civil Engineers Would Manage the Yolanda Funds?

When supertyphoon Yolanda (International name Haiyan) hit the central region of the Philippines in November 2013, thousands of Filipinos were left homeless. Majority of the concrete and timber houses along the storm’s path were totally damaged if not thrown away by the wind.

The situation challenged the housing sector to restore the affected families’ basic right to have a decent shelter.

As part of its mandate, the National Housing Authority, together with the Housing and Urban Development Coordinating Council of the Philippines, needs to provide such basic commodity that were taken away from the victims of the supertyphoon. The government had prioritized resettlement in its Yolanda Rehabilitation and Recovery Programs.

But three years since the strongest storm in recent history struck, there is an imbalance between the government’s resettlement efforts and the Yolanda funds.

In actual, the government provided a P150 billion requirement for the Yolanda Rehabilitation and Recovery Programs. Let’s just assume that the Department of Budget and Management will allot half of that amount to resettlement, being a critical factor in regaining the normal life lost by the typhoon victims. So civil engineers have P 75 billion to spend for the housing.

There are three basic types of resettlement that civil engineers can choose to build: nipa huts, container houses, and prefabricated houses. How many of those resettlement types can be built given the allotted funds?

To effectively compare the number of such resettlements which can be constructed within the budget, let’s use the minimum standard square area for housing which is 22 square meters. Time frame is not really considered a factor, since not all houses are built on-site. That makes it hard to relate each type based on the period of construction.

Nipa huts, locally known as bahay kubo, are houses made of wood, bamboo, and nipa or anahaw, which are native to the rural areas of the Philippines. For a 25.2-sq.m. nipa hut, one could spend about P67,500. Taking into consideration the minimum standard housing area, we can build a nipa hut with 22 sq.m. for about P59,000.

Container houses, as the name suggests, are houses made from unused container vans. The smallest floor area of this kind of settlement which is 15 sq.m. could fit a Filipino family. When unfurnished but with the necessary utilities, each could cost Php115,000. If adjusted for the minimum standard housing area, each container van is priced at about P169,000.

On the other hand, prefabricated (prefab) houses are dwelling types which are manufactured off-site with different parts, only shipped to the site to be assembled. It’s a modern housing technique that removes that need to build on-site. A 15-sq.m. prefab house costs about P180,000. Its equivalent for the minimum standard housing area is P264,000. 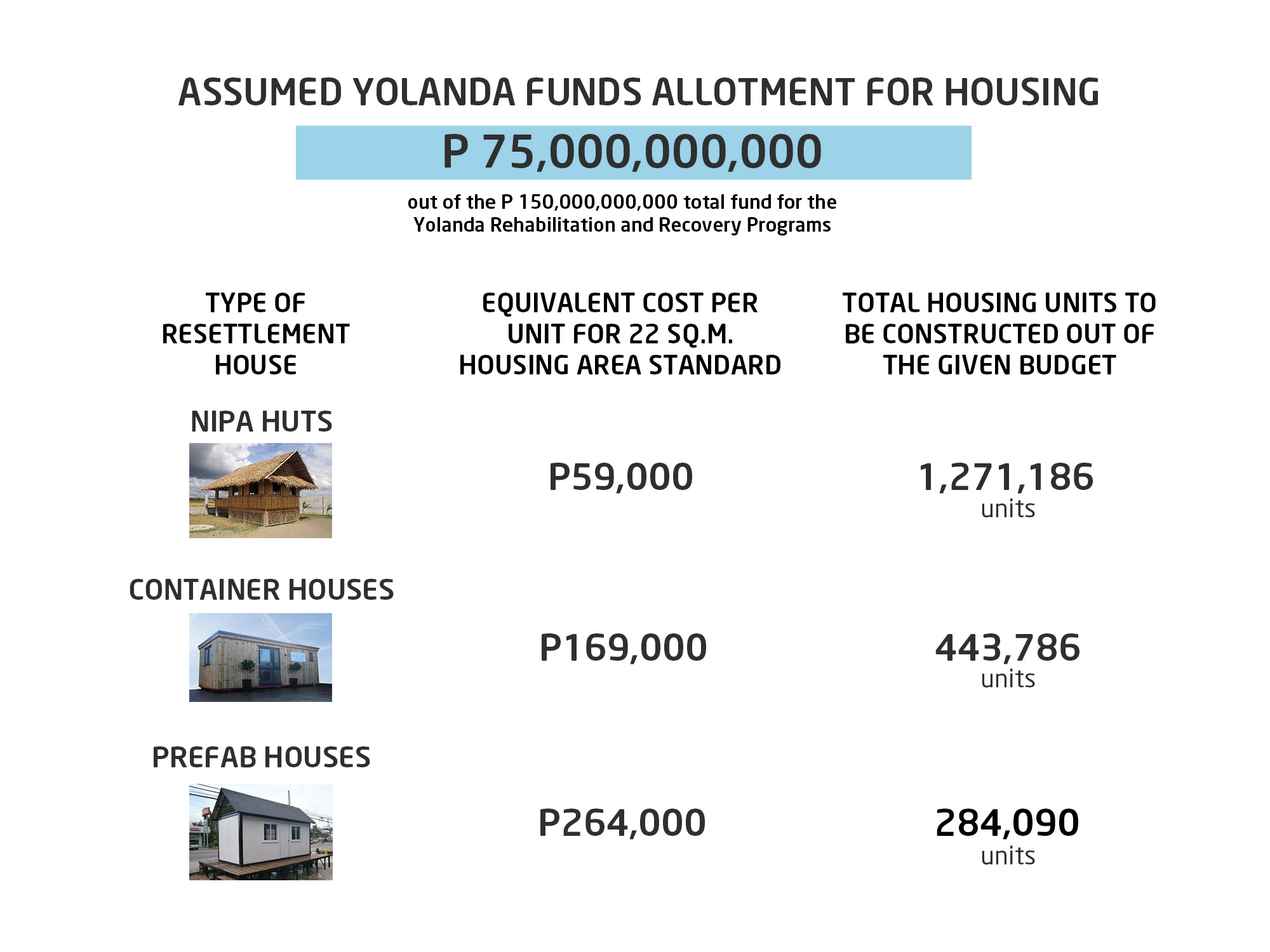 Whichever the choice is, each resettlement type within the assumed budget is fairly more than the number of the target housing units recorded by the National Economic Development Authority which is 205,128 housing units.

The remaining resettlement houses could be used for other government programs such as the housing for informal settlers and army & police officers housing. It’s a setup that the government and its people win.

It is easy to say the building of such types of housing units in theory. But the real-world public housing construction involves a lot of politicking that civil engineers are not really accustomed with. Until such time that such engineers could adopt with that, the important what ifs, such as the handling of Yolanda housing, can only linger.