There is a skyscraping bridge in China newly hailed as the world’s highest not really intended for commuters with an irrational fear of heights. Called the Duge Beipanjiang Bridge, it is suspended over a gorge 565 meters (1,854 feet) high that is equivalent to about one and a half the height of the Empire State Building.

Its construction took three years with completion on September 10, but it was only opened to vehicular traffic before 2017 starts.

The four-lane roadway bridge shortens the travel times between Liupanshui in the Guizhou province and Xuanwei in the Yunnan province to two hours instead of the current five, China Central Television reports. It is part of the 2,115-mile Hangrui Highway which connects Hangzhou to the China-Myanmar border crossing in Ruili. 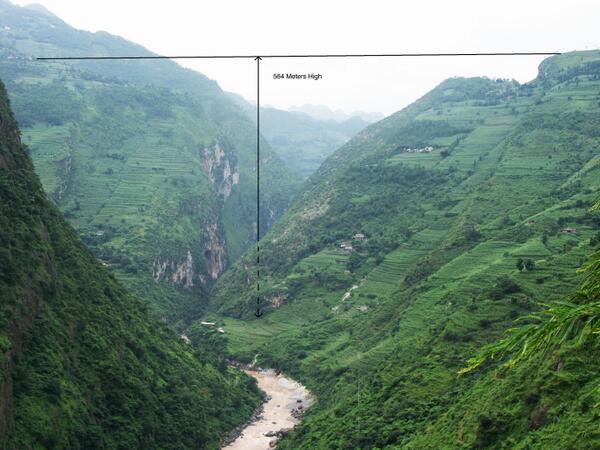 What this means for the Sidu River Bridge, also located in China, is that it no longer holds the world title for the world’s highest bridge at 560 meters (1,837 feet).

However, the Millau viaduct in France remains as the world’s tallest bridge – in terms of its own structure instead of how high it is off the ground – topping out at 343 meters (1,125 feet).

Spending for the construction of Duge Beipanjiang Bridge was relatively lesser than its similar structures. It was only built for $146.7 million.

To compare, the Golden Gate Bridge which spans the San Francisco Bay was built in 1933 for $1.5 billion, while its neighboring New Bay Bridge completed in 2013 ended up costing $6.7 billion.

Engineers worked at nauseating heights and foggy environment to construct the cable-stayed steel bridge in time for its target opening. Furthermore, they tell that the the deviation in construction must be within five millimeters.