This Engineer Got Fined for Being an Engineer

When you are an engineer in Sweden, perhaps you are not allowed to call yourself such or practice professionally when you are in the state of Oregon in the US.

That was the lesson that Mats Järlström learned when he made an effort to reveal the design flaws in the mathematical formula used to govern the timing of US traffic lights, introducing himself as an engineer in the emails to the state’s engineering board, only to be fined $500 for it.

All of this happened after his wife got a ticket from an automated traffic camera in Beaverton, Oregon near their home back in 2013. Having felt that there was something wrong with the math behind the traffic lights timing, the Swedish electronics engineer investigated for a year looking into the yellow lights and red light camera statistics.

He claimed that the yellow traffic lights do not last long enough and that the camera catches drivers running with the yellow lights on. Its timing is “too simplistic for the modern world,” he said. However, the same standard, from 1959, is still used elsewhere in the world.

“They only looked at a vehicle traveling safely directly through an intersection, however the equation they developed is not used for turning lanes,” he defended his computations to the Motherboard. “When you make a turn you slow down but that’s not accounted for in their solution, so people are getting caught in red light cameras for making safe turns.”

As soon as he concluded about the said glitch in the traffic lights in September 2014, he informed the concerning government office through emails. Only to be met with an investigation about his engineering practice and later a fine. 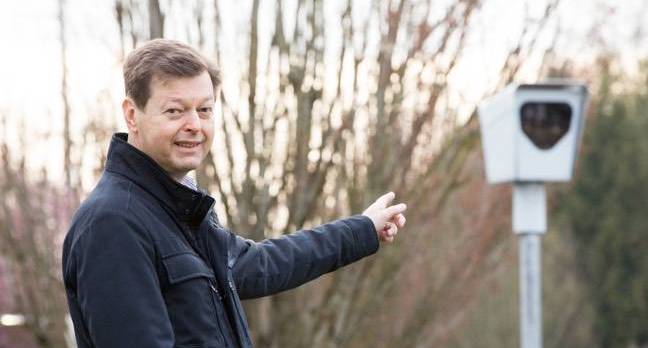 The Oregon State Board of Examiners for Engineering and Land Surveying got to dig into Järlström’s practice as an engineer and responded to him that he is not an eligible engineer in Oregon and should be probed.

It said, “ORS 672.020 (1) prohibits the practice of engineering in Oregon without registration … at a minimum, your use of the title ‘electronics engineer’ and the statement ‘I’m an engineer’ … create violations.”

In March of 2015, Järlström was investigated. Almost a year and a half later, it was ruled that Järlström had engaged in unlicensed engineering and assessed a $500 fine. Now, Järlström is self-employed with focus on audio product tests and repairs. He has formal electrical engineering education in Sweden but it is not subject to licensing.

For a while, he worked as an airplane-camera mechanic with the Swedish Air Force, and in research and development for Luxor Electronics. In 1992, he moved to the US and ran the electronics group at Triad Speakers in Portland, designing audio products.

His work in the last 3 years were mostly in the study of traffic light timing. But too bad he has no say about it in Oregon because apparently, the engineering board there says he should not be free to publish or present his ideas.

“I’m not practicing engineering, I’m just using basic mathematics and physics, Newtonian laws of motion, to make calculations and talk about what I found,” Järlström said.

Seeking to break the limitations of sharing his valuable piece of traffic light timing information, Järlström tapped the Institute for Justice, a libertarian public interest law group, to file a federal lawsuit in US District Court in Portland, Oregon. This was his challenge to the state’s Professional Engineer Registration Act as a violation of his First Amendment right to free speech.

“Mats has a clear First Amendment right to talk about anything from taxes to traffic rights,” Sam Gedge, an attorney for the Institute for Justice, told the Motherboard. “It’s an instance of a licensing board trying to suppress speech.”

Needless to say that Järlström was shocked with how things are going after he did his computations and shared them. He added that he felt violated for sharing his ideas.

“I’ve done this freely, self-funded, as a civil service. I want to show these ideas to the public and I’m getting surpassed. It’s been a civil rights violation since day one,” he shared.