These Mobile “Trees” Have The Environmental Benefit Of Around 275...

Air pollution has long been a problem around the world. It is the reason for seven million premature deaths a year, which makes it the largest single environmental health risk according to the World Health Organization.

The most well-known and best way to reduce air pollutants is to plant trees since their leaves catch and absorb harmful particulates. Unfortunately, planting new trees isn’t always a viable option and will take decades before they mature.

This is why Green City Solutions, a Berlin-based company created the “CityTree” to solve this problem. It is a mobile installation that removes pollutants from the air. The CityTree isn’t an actual tree but a moss culture. It is only around 4 meters tall, and around 3 meters wide and 2.19 meters deep. It’s available in two versions: with or without a bench. The City Tree can already be seen in different cities around the world, including Oslo, Paris, Brussels and Hong Kong. According to the company, their invention has the environmental benefit of up to 275 actual trees!

According to Zhengliang Wu, co-founder of Green City Solutions, “Moss cultures have a much larger leaf surface area than any other plant. That means we can capture more pollutants,”

The large surfaces of moss that is installed in each tree is capable of removing dust, nitrogen dioxide and ozone gases from the air. The installation is autonomous and needs very minimal maintenance. It also has solar panels that provide electricity, and a reservoir to collect rainwater which is pumped into the soil.

The CityTree also has sensors that measure the soil humidity, temperature and water quality. “We also have pollution sensors inside the installation, which help monitor the local air quality and tell us how efficient the tree is.” Wu said. According to the creators, each CityTree is capable of absorbin around 250 grams of particulate matter a day, and can contribute to the capture of greenhouse gases by removing 240 metric tons of CO2 a year.

The company also plans to introduce their invention to cities in countries like india which have elevated levels of pollutants. As of now, around 20 CityTrees have already been installed, and each costs around $25,000.

Read more  This Upcycled Roof Made From Garbage Can Produce Electricity 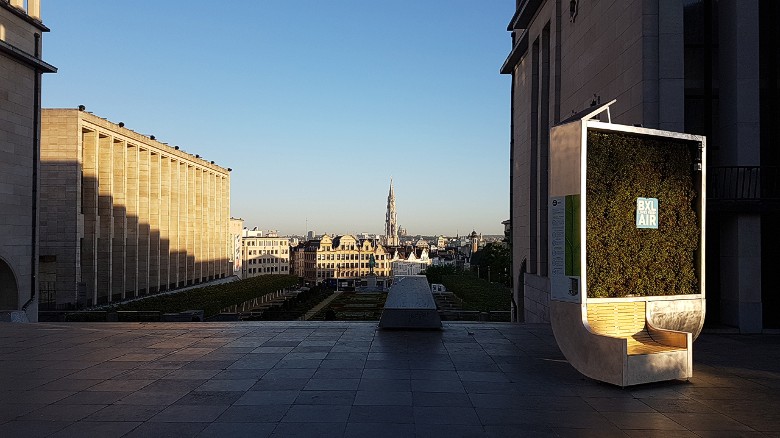 The team also has plans to introduce the “CityTree” to cities in lower-income countries such as India, which tend to have elevated levels of pollutants.

So far, around 20 CityTrees have been successfully installed, with each costing about $25,000.