Engineers Hack a Tesla to Run Both on Electricity and...

Hydrogen has so much potential as an alternative to gasoline. And now, engineers in a gas supplier in the Netherlands have honed this potential by making an electric-powered vehicle run on hydrogen.

That’s right: there’s now a Tesla Model S, a renowned electric vehicle, which has hydrogen as its secondary power source. Made by Holthausen Group, it is aptly named Project Hesla, the first electric- and hydrogen-powered Tesla in the world.

Having two power sources, the vehicle now can travel twice as far compared to the range of the Model S P100D. From 506 kilometers, Hesla is able to travel nearly 1,000 kilometers using a fully-charged battery and full supply of hydrogen.

The science behind this car is fairly easy. Hydrogen molecules are pumped into a fuel cell, where an anode removes their electrons, which pass through a circuit to the battery to give it additional charge. The converted hydrogen now as ion pass into a cathode, to reunite with electrons and bind with oxygen to form water and exit the fuel cell.

But building Hesla wasn’t easy, according to Holthausen Group engineer Max Holthausen. He referred the vehicle’s system as “a big maze.” 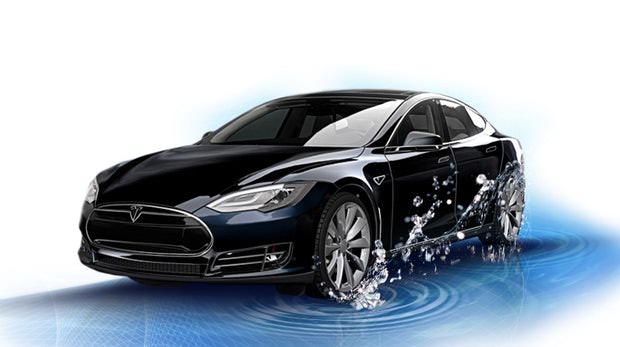 Tesla wasn’t involved in the making of Hesla so the Model S was acquired second-hand. For this, the engineers had to develop and implement a workaround.

Other than finding ways to put hydrogen as another power source for the vehicle, Holthausen Group had to spend so much. The conversion was estimated at $58,000 excluding the vehicle’s cost. That only means that the Hesla has a price tag of $205,000.

But all of this about Hesla doesn’t end here. A report by The Drive indicated that the engineers are still working on perfecting their prototype.

Could we expect more of these innovations from engineers? It’s unlikely. Because hydrogen-powered fueling stations are hard to find.

In the United States, there are only 39 of them, majority of which are on the West Coast.

Moreoever, cost is the one of the biggest reasons why hydrogen is not yet a popular source of power not only in vehicles. To be able to have scale, scientists have to find ways to make the hydrogen production a lot cheaper.