Engineers are Looking at the World’s Fastest Bird for Inspiration...

Taking inspiration from nature to produce new systems and devices is not at all new in the field of science and engineering. Now researchers are looking at birds for bioinspiration of a much improved aircraft within the next 20 years.

Scientists at BAE Systems and City, University of London examined the flight of peregrine falcons, which are hailed as the fastest birds in the sky at a top speed of 242mph recorded in 2005 from a diving for prey. With their wingspan that extends up to 120 cm and their one-way breathing system, falcons are the best bioinspiration for new technologies for aircraft.

So far there are concepts already studied about the mighty flight of falcons. One of them is the ‘sensory feathers’, which are based on a peregrine falcon’s ability to maintain flight stability at high-speeds.

The researchers observed that such birds, when hunting for prey, are subjected to forces which are sensitive to small changes in its angle of attack. Falcons have an optimum angle of attack and once they exceed that even on a small margin, the sensory feathers, or the feathers at the rear of its wings, vibrate and send a signal via nerves in the body.

That body reaction tells the bird that it may tumble and fall soon, giving it time to align its body back to stability. 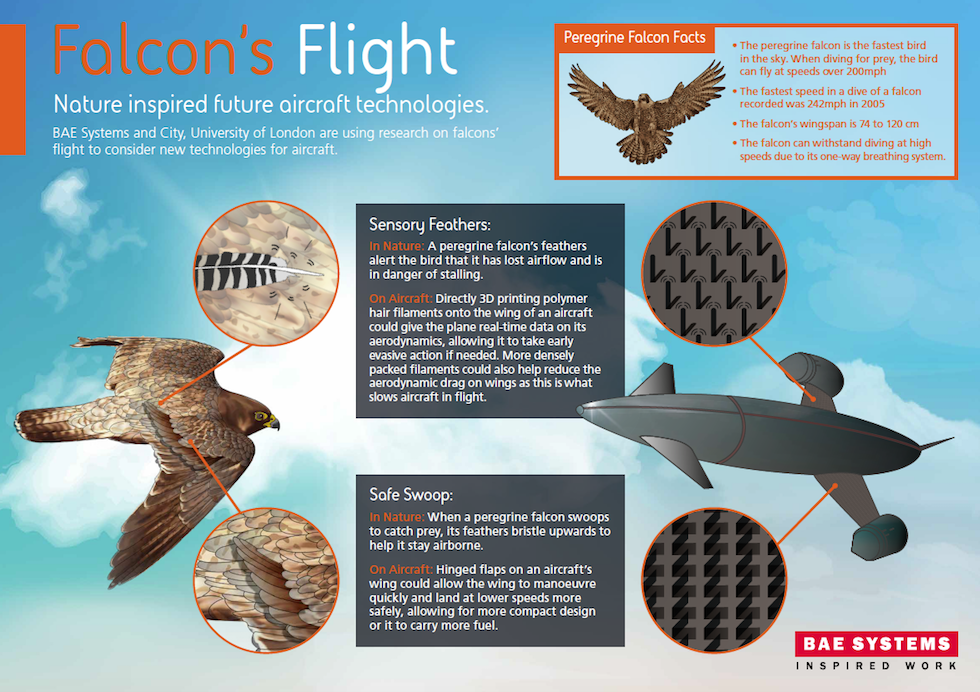 Upon realizing this, the researchers thought of applying this same principle to an actual aircraft by attaching a 3D-printed polymer hair-like filaments onto the skin of an aircraft. By theory, it should real-time air flow data and alert the pilot to take action just like how a falcon responds to an impending tumble and fall.

Moreover, they realized that more densely packed passive polymer filaments can change the airflow close to the surface of the aircraft. That has a significant impact in the reduction of drag on the aircraft wing-skin.

Prof Christoph Bruecker from City’s Aeronautical Engineering department recognizes the incredible speed of the bird in consideration. He says, “The peregrine falcon is the world’s fastest bird, able to dive for prey at incredibly steep angles and high velocities.

“The research work has been truly fascinating and I am sure it will deliver some real innovation and benefits for the aerospace sector,” he added.

This is not the only part of the falcon’s flight that aircraft can mimick: the response of the bird’s body upon realizing the need to stabilize is also studied.

In the case of the aircraft, there could be small flexible or hinged flaps that makes it easier for the wings to control quickly and land more safely at lower speeds at the same time. For this design, the aircraft could be more compact or open to give room for more fuel.