These Architects Turns Salt to Cement

According to their CNN interview, the two architects from Japan and Abu Dhabi were inspired by the UAE’s mineral-rich sabkha — salt flats that are part of the country’s wetlands. “It a huge area … that’s often overlooked,” Al Awar told CNN.

Sabkha is an old traditional blocks hewn from salt flats and used to build Siwa, a medieval town in Egypt. Al Awar and Kenichi turned to waste brine, which contains many of the same minerals.

Al Awar said their magnesium-based cement can be “equivalent of Portland cement”, which uses calcium carbonate as a raw material and is the most commonly used cement in manufacturing concrete.

Precast concrete with a mixture of desalinated brine sea salt rejects in the construction of product produced by casting concrete is the building material of tomorrow. Precast blocks with sea salt is the future reusable mold or “form” which is then cured in a controlled environment, transported to the construction site and lifted into place (“tilt up”) could be used to construct low-rise buildings. According to Al Awar and Kenichi, they hope to develop more innovative cement and building materials for multi-story buildings. 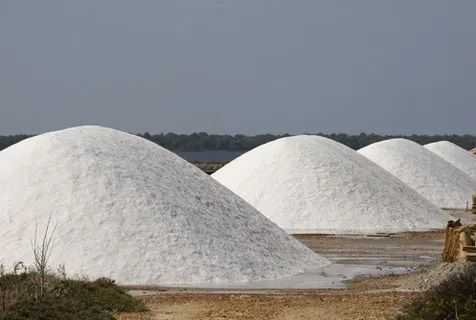 New York University in Abu Dhabi Has The Same Concept

According to the initial report last year in the United Arab Emirates, Kemal Celik, professor of civil engineering at New York University Abu Dhabi and the director of the Advanced Materials and Building Efficiency Research (AMBER) Laboratory and his team realized they could use over 70 operating desalination plants within the Gulf region, gather all the sea salt purified processed brine left overs before it is dumped back into the Gulf sea. Synthesizing the magnesium oxide in brine into a cement-like substance requires much less heat than making ordinary cement. And, Celik says, as magnesium oxide cement hardens over its lifetime, it absorbs carbon dioxide over time to gain strength, potentially making it a carbon-negative building material.

In fact, Celik’s special brand of cement “absorbs carbon dioxide during the hardening process because its strength depends on it, and can continue to absorb carbon dioxide long after it has been mixed into the concrete, making it carbon negative.” So, roads and buildings made with it could actually absorb carbon dioxide from the atmosphere over the years and help combat climate change, he says.

“This kind of cement is not just environmentally sustainable but it’s also cost-efficient because desalination plants could start selling their waste to cement manufacturers, and profit from it. It’s a win-win situation for everybody.”

Lab tests have proven that cement made with reactive magnesium oxide is just as strong as the Portland variety, Celik says, and further studies will tell them what kind of other internal reactions are taking place over the long-term that could impact the way it’s used. Work is also ongoing to speed up the carbonation process.