One of the problems with power lines, is that sometimes they get all kinds of trash hanging from them which can cause accidents when not cleaned up. Usually, maintenance personnel are sent up to clean the trash that are stuck, but this process can be dangerous. That is why in Xiangyang China, they have devised a new way to clean up garbage that is stuck in their power lines. They are using drones–specifically, flame throwing drones.

Maintenance workers from an electric company in Xiangyang, China using a fire-shooting drone to burn trash stuck on electrical wires.

Yep, you read that right. Just when you thought drones couldn’t get any cooler, here they are! These specialized fire-spewing drones are being utilized by an electric power maintenance company in China to clean up plastic bags and other debris that get caught on high-voltage wires. This will be helpful since some garbage get caught in places that are hard to reach for humans. 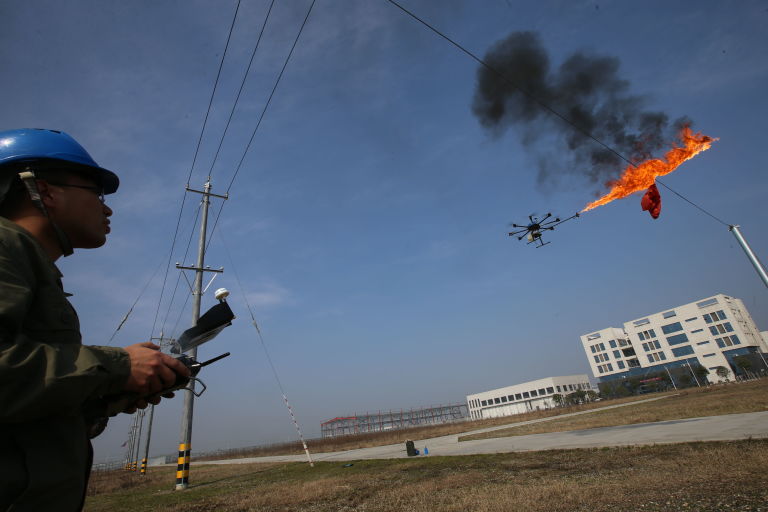 Maintenance workers from an electric company in Xiangyang, China using a fire-shooting drone to burn trash stuck on electrical wires.

The drones would be deployed to fly up along hard-to-reach stretches of high-voltage wires and burn off trash such as plastic bags with giant flames–and it looks really cool. Shooting fire at a power line does seem dangerous, but is less dangerous than letting a human pulling trash from a wire that is 30 feet up in the air.

We think that there should be safety measures for this process though, as it too may create accidents if not handled with care. However, this certainly shows that the age of robots are here, and by taking risky jobs that can be too dangerous for humans to handle, these robots are helping make the workplace a safer place to work in.