Desktop and laptop computers in use today are products of a digital revolution developed over time. The massive computing power that people enjoy today has an arguable origin. Some may say that computing started from the moment people learn how to count, while some may push that the beginning of computing is with the bulky machines. Pioneering computers dated many centuries ago, not only during the industrial age.

But what matters is what textbooks taught us as the gospel truth: computing really started with mechanized systems. And we agree.

Listed below are the 10 most influential and pioneering computers in the history, which became pillars of the digital revolution.

Far from the common definition of a computer or a calculator, the abacus is the ancestor of all computing machines.  It is a mechanical computing aid that can perform addition, subtraction, division and multiplication; and can extract square roots and cubic roots. It was first used in Samara dating back to before 2,000 BC. The name was derived from the Greek word ‘abax’, meaning calculating board.

Also called the counting frame, it works by manipulating the beads that slide on rods, usually used with the index finger of the thumb of one hand. It was Charles Babbage who introduced the first calculating machine, nearing the first computer, known as the Difference Engine. It uses the method of finite differences, performing only arithmetical addition. This calculator is considered a decimal digital machine – decimal, since it uses the familiar ten numbers ‘0’ to ‘9’, and digital, because it only recognizes whole numbers. It was purely mechanical which can be driven by a crank handle and containing cogs, gears and levers.

Read more  This is the Coolest Upgrade a Sundial Could Get

The Difference Engine was followed by the Analytical Engine , which was more ambitious. It is a general-purpose programmable computing engine, a lot like modern PCs, but uses punched cards.

Considered to be the world’s first electronic, digital programmable computer is the Colossus. It is also called Mark 1, built during World War II in England and used to break the codes of the German Lorenz SZ-40 cipher machine that was used by the German High Command.

Colossus was designed by Tommy Flowers, with input from Harry Fensom, Allen Coombs, Sid Broadhurst and Bill Chandler. The machine was used to solve a problem posted by codebreaker Max Newman from Bletchley Park.

Probably the most important part of Colossus is its input device called the bedstead, which is an optical reader for punched paper tapes reading data at a speed of 5,000 characters per second. ENIAC, or Electronic Numerical Integrator And Computer, is dubbed as the first universal electronic computer. It was born out of the need to have an all-electronic calculating machine, to which physicist John Mauchly had proposed. But the U.S. Army needed a much complex machine to calculate wartime ballistics tables, hence ENIAC.

It became the first large-scale computer to run at electronic speed without being slowed by any mechanical parts. It glowed with an unprecedented 18,000 vacuum tubes, which was created with strict circuit design guidelines to maximize reliability. ENIAC operated on decimal rather than binary arithmetic. 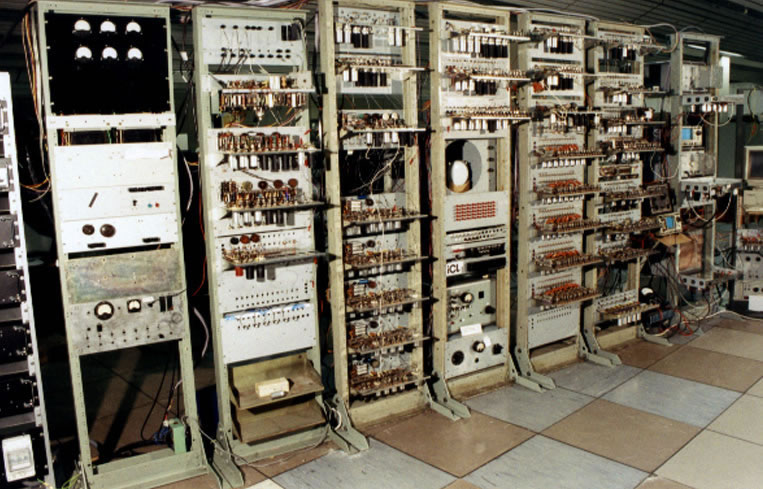 The Manchester Baby, or the Small Scale Experimental Machine (SSEM), is hailed as the world’s first stored program computer. Made in the University of Manchester, hence the name, it had the power to execute a program stored in internal memory, rather than on paper tape or hardwired in.

Having this computer underscored the birth of software. It was the first to implement a stored program concept that is still used in modern computing.