Constructed by Consolidated Contractors Company and Teyseer JV on behalf of the Lusail Real Estate Development Company (LREDC), the Lusail Boulevard Tunnel allows the A3 Road to pass under the main boulevard and is one of the largest tunnels ever constructed in the Middle East. The main contract was to construct the cut and cover tunnel plus all associated structures and services. The total length of the tunnel was 2km including the troughs, while the covered element extended over 650m. The overall width was around 45 meters incorporating 3 cells: two lanes each for north and south bound roads and an approximately 13 meter wide provision for a light rail transit system in the middle cell. The total volume of concrete poured was in excess of 300,000 m3 With the sheer volume of concrete involved, one of the central challenges of the project would be to get all the complex structures cast of in the short time frame required by contract. The formwork system used would be key, and he contractor’s strategy was to look for a system with a rapid cycle that was still safe and easy to operate. With this in mind CCC turned to Delmon for a cost effective solution. Delmon Scaffolding LLC supplies formwork and scaffolding solutions throughout the Middle East and are distributers for Ulma formwork. They are head quartered in Dubai, but have sub offices in Doha, Sharjah Muscat, Abu Dhabi and Riyadh.

The tunnel walls were substantial, up to 13 m high, 2m wide and had to be cast in a single pour. This height of fresh concrete can generate considerable pressure on the formwork so any proposal needed to be robust, but also quick and easy to use in order to achieve the rapid cycle required. The roof slab was also formidable, approximately 30,000 m2 total area, 1.8 deep and with a clear height under soffit of 9 meters. Shoring towers are ideal for this type of application, but because of the scale of the project it was feared that assembly, dismantling, transporting and reassembling for the each pour would consume enormous resources and time.

For the walls, Ulma Enkoform was the ideal and obvious solution. Enormously versatile, the VM20 beam and DU Waler spacing can be adjusted to cope with any geometry or loading, allowing it to handle the huge concrete pressure involved, while still being relatively quick and easy to handle for the contractor. For the slab, Ulma T60 shoring towers were well suited in terms of the load bearing capacity and the height under soffit, but with the vast quantity of slabs would be somewhat labour intensive. In order to overcome this problem, we proposed to configure the T60 into ‘preassembled tables’ that could be stripped and moved without dismantling. We quickly devised a general layout in which rows of tables were stripped while still leaving two lines to back prop, which we estimated would reduce the labour required by as much as 75% compared to the conventional approach. With the considerable advantages offered by our proposal, Delmon was duly awarded the formwork contract and commenced supply almost immediately. The contract program was extremely challenging, however the contractor, with full support from Delmon Logistics, Engineering and Field Assistance teams, quickly mobilized and began progressing the structure. 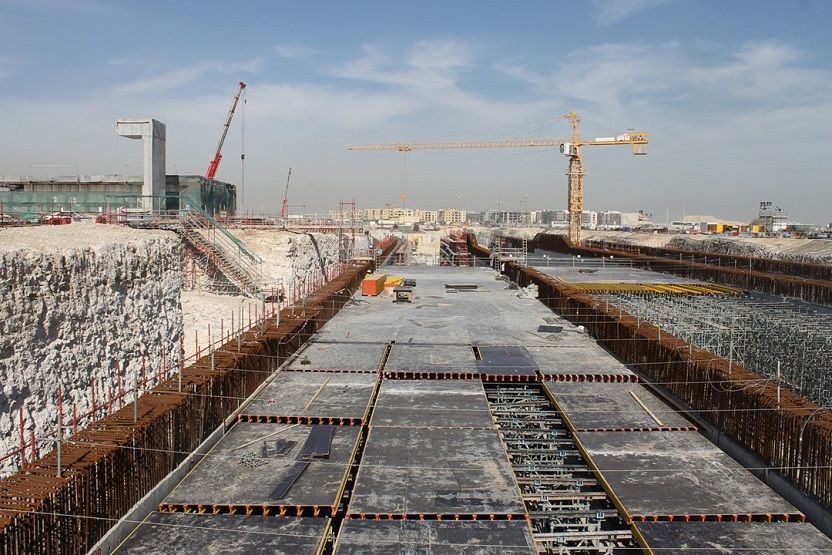 The formwork supplied proved a hugely successful. The slab works commenced in August 2015 and finished on schedule in March 2016 and despite the late start of this activity.

Recalling the construction project, Regional Sales Director Frank Abbott commented, “The success of this project highlights the importance of the team behind the equipment. The Delmon infrastructure team understood the challenges of this project from the outset and  were able to propose an innovative solution formwork that ultimately saved our client time and money.”