Here’s The Right Way To Use Rice To Save Your...

So you were walking down the street, texting on your phone, when suddenly, your hand slipped, and your phone fell down into a puddle of water or you know, you could’ve just made the unwise decision of bringing your phone to the bathroom and dropping it in the toilet. You pickup your phone and find out that it won’t power on. Don’t worry! Most of the time, your phone could still be saved. The trick is to act as quick as possible, and use the ye old phone into the rice trick. However, it isn’t just as simple as just picking up your phone and dumping it into a sack of uncooked rice. Doing it the wrong way could possibly make the situation worse and kill your phone even more. Here’s the right way to do it: 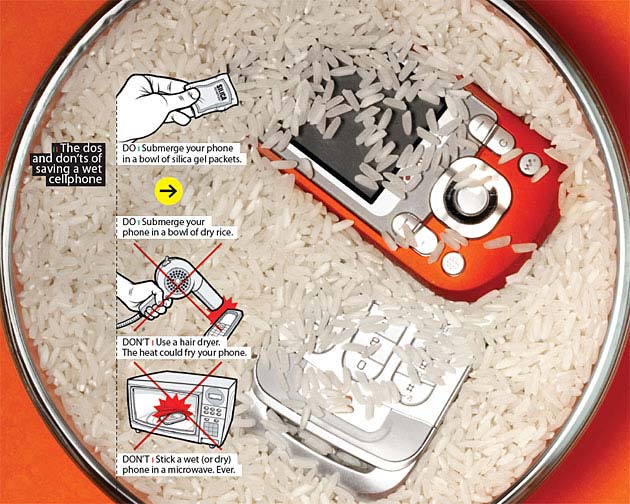 First, remove the battery. Pull it out ASAP to cut off the power. Also, resist the temptation to power up your phone to see if it works. Even if it did, powering it up could cause a short circuit and destroy your phone even further. You might want to remove the sim card as well.

Next, Dry your phone. Dry it as soon as possible. The longer it stays wet, the higher the chances that its inner pieces will corrode. DO NOT use a hair dryer or anything hot though. Some parts of your phone are sensitive to heat and will be fried if you do this. Instead, use a can of pressurized air or maybe even a vacuum cleaner to blow or suck away all the water without heating it up.

Lastly, put your phone in a desiccant; and in this case, use uncooked rice. A desiccant is used to suck away any excess moisture from things. You could probably also use a bunch of silica gel (the white packets and stuff you see in clothes and food that say “Do not eat”), but I doubt that you have a bunch of those lying around in your house, so rice would be more convenient.

Also, I shall repeat this again, avoid exposing your phone to heat. I can’t stress this enough. No hair dryers, ovens, AND microwaves. While they will get your phone dry really fast, heat will destroy those tiny parts of your phone by warping its components and melting its adhesives. You also may want to avoid putting rubbing alcohol on your phone since it could dissolve the adhesives as well.

And finally, if your phone fell in saltwater, dunk it in freshwater first before drying it. Saltwater can leave behind crystals that can damage its components when evaporated.

Hopefully, this guide will help you just in case you accidentally drop your phone in water again.