Here’s How Transformers Toys Are Designed

Every 80s and 90s child has had at least 1 transformers toy in their lifetime. I mean, who wouldn’t want one? You’re literally shape shifting their forms from normal vehicles (or animals) into awesome mecha robots right before your eyes!  But I’m pretty sure you’ve also always wondered how in the world were these contraptions made. Well, let’s take a closer look at Hasbro’s HQ to find out.

It first starts out in as a concept. The team handling it will discuss what they want in the conference room, and plan out everything from the concept to the final product.

For example, for the Beast Hunters series, Josh Lamb, Transformers Senior Design Director, and Lenny Panzica, Product Designer, know that the new toys have to be beasts. So what do they do? They take pieces of several old transformer toy models and put them together Frankenstein style. This will give the very rough initial design of what they want to do and how it’ll work. 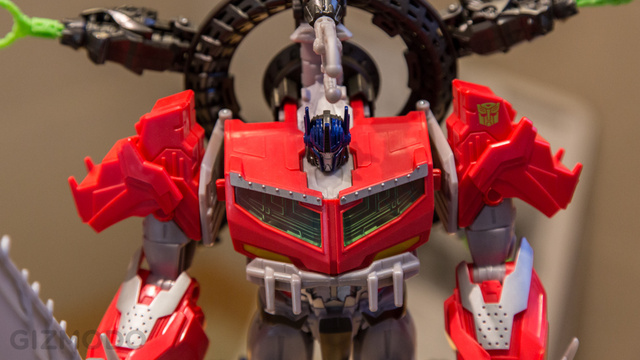 Once that was done, Panzica would do the sketch of the possible final product, which is harder than it sounds. We all have to remember that he’s not just designing a robot, he’s designing a car or creature that’ll turn into a robot. This means he has to design both states of being, as well as make sure it’s actually possible for it to change from one form to the other, smoothly. 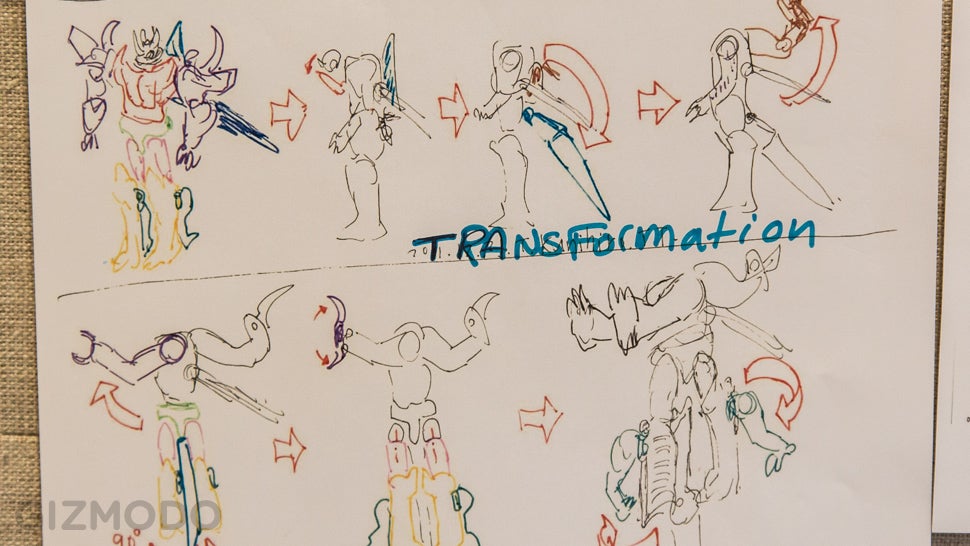 “You get your alt mode (the vehicle or animal mode) first, and then reverse it into the robot,” Panzica explains. “With a normal transformation, you know the basics. The tires can fold back and expose the feet, or you can make the chest into the head for the robot.” 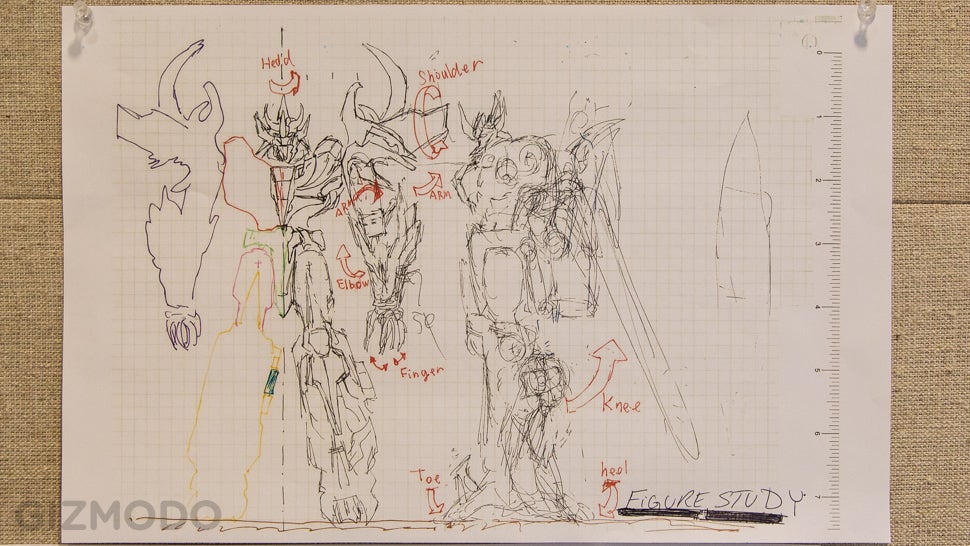 Once the sketch is done and it’s been planned out which piece turns into what and how it’s done, they then send it to Japanese partner company, Takara Tomy. It’s them who handle the actual engineering and 3D design of the parts, with scale and articulation. Then, the molds of each piece are made. Each little detail of each part is well thought out. Is this joint really necessary? Does this forearm need spikes? Do we need to add one more millimeter of depth on this part? Once that’s been thought out, they make the molds of each individual piece. There, they’ll ponder about how to make each piece, and what materials should be used to make the coolest possible model without using too much expensive materials. 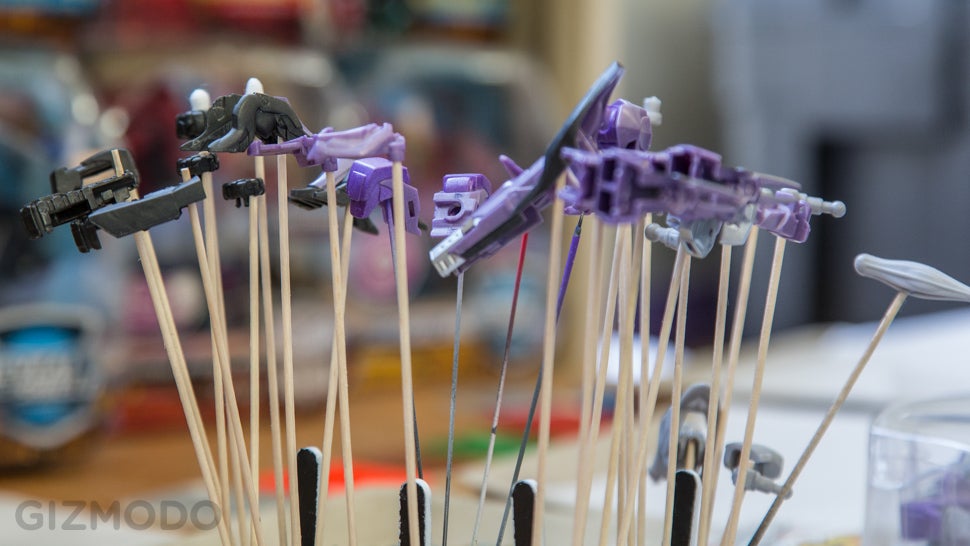 “We’re always mindful of how many molds we’re using, how much plastic, how many color breaks, even package size” says Lamb. “Each of those add cost, and while we obviously need to hit costs, we do our best to make sure you’ve never got a Transformer that feels cheap.”

This is probably why transformer toys made out of metal will probably never happen. They’re way too expensive to mass produce. “We’ve looked at metal and die-cast, but the cost has skyrocketed,” Lamb says. There will however, be some limited edition and collector’s items versions that do use metal parts, although they’ll be pretty expensive.

Finally, it’s time to actually build the final model. It’s first made into a CAD drawing to simulate if it will transform properly once assembled. Then, a prototype is made straight out of Hasbro’s on-site workshop, and then sent to the master model maker. Their job is to poke and play around with the prototype as much as possible, and if something feels just a little too loose or full on janky, they’ll adjust the CAD drawing accordingly, and another prototype is made. This cycle repeats until the master model maker finds it 100% perfect, functional, and sturdy. 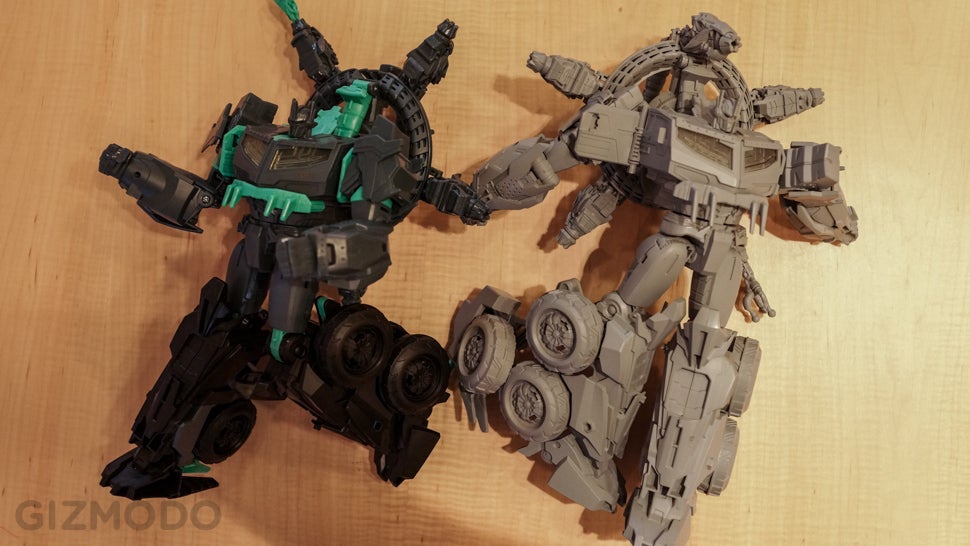 After that, it’s then sent to Mark Maher, who paints each master sample by hand. Once that’s done, it’s sent into the factories for mass production, then sent into stores, and finally on your very hands.

This is just the summarized process of the whole thing. If we were to talk about the whole in-depth process of how it’s made, we’d be here forever. It’s nice to see such intricate thought and complex work put into something that seems so mundane to make. Also, it’s all worth it in the end. All for that awesome transformer toy of your childhood dreams.