CityHome was an MIT project conceptualized back in 2014. It was meant to be a solution for small living spaces. It features a single, movable unit that can move on its own and can pack several home necessities within it. Back then, it was just a concept. Now, MIT Media Lab has collaborated with Yves Béhar from Fuseproject to bring the concept to life. Now renamed to Ori Systems, after the Japanese art of Origami, the automated home unit is available for preorder for $10,000. It’s available in the cities of New York City, Chicago, San Francisco, Boston, and other major US and Canadian cities. 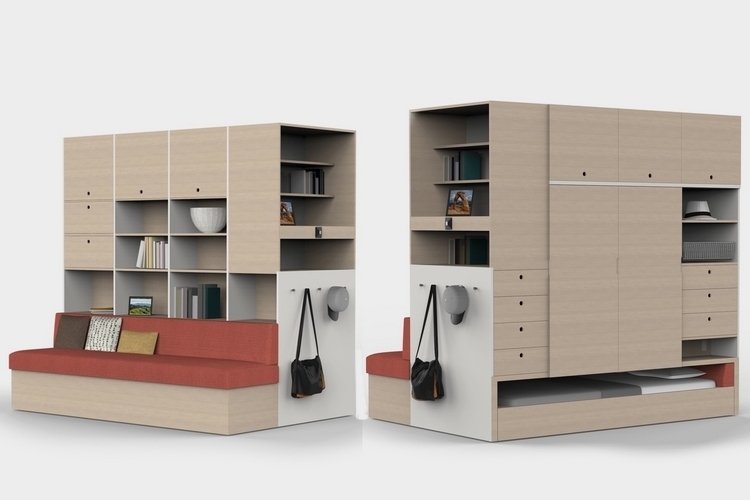 Ori Systems comes in 2 sizes, “Ori Full” and “Ori Queen”. For now, only real estate developers can actually preorder it, with the delivery beginning at the end of 2017. Guests from Airbnb in Boston had the pleasure of testing the prototype for Ori Systems for the past year. And now, the model for it has already been installed in certain apartment complexes in 10 US and Canadian cities, one of which is The Eugene in New York.

Both sizes of Ori Systems come with an automated bed, workstation, drawers, a closet, and storage. The only difference is that Ori Queen comes with a couch. The automation is powered by a standard AC plug connection. Users can control the elements via the physical control interface built in within Ori Systems itself (at its side), via an app, or even with voice commands through Alexa (“Hey Alexa, can you ask Ori to make the bed?”) The unit is made out of light yet sturdy plywood that’s on wheels, so in case of a power outage, you don’t need to worry about anything, and you can just move it manually.

While $10,000 might seem like a lot to invest in for a single unit. However, keep in mind that if you buy all the pieces of furniture that Ori Systems comes with individually, it’ll cost you much, much more. Imagine, a single medium sized IKEA bed with a mattress and beddings already cost $1,000. Also, the fact that you can, well, automate these things via voice command is pretty handy. Also, with the way the market works, if Ori Systems becomes popular, the cost of it would begin to go down as the manufacturing scale goes up.

MIT Media Lab and Fuseproject had manufactured around 1,200 units for their first run. Soon, they hope to bring Ori Systems to more countries around the world in the near future, saying they “acknowledge that the need for new urban solutions is a global challenge.” And that’s indeed true. With the ever growing city population and the growing demand for micro apartments, people need to do more in less living space. Ori Systems provides the perfect solution just for that, allowing you to take up less space for more things without having to clutter everything in one area. It’s pretty handy, and we say it’s well worth spending the $10,000.