Solar Balloons Above the Clouds Will Get Energy Amid Rain

What… solar balloons? Yup you heard it right.

One of the greatest challenges of existing solar power generation systems is that when there is no sun, there is no energy stored; thus the solar panels go idle. Another problem of solar panels is that such system consumes a lot of land. But a suggestion from a French solar researcher will answer those two, and will potentially supply power more than the current solar models.

Jean-François Guillemoles plans to put up floating PV balloons that are higher than the clouds. That way, when there is rain, the balloons still gets energy. In theory, this proposal will yield three times as much power per foot than the terrestrial version. Of course this also eliminate the need to have a wide space for the panels to be put up being like balloons which only needs a tie up with a string. 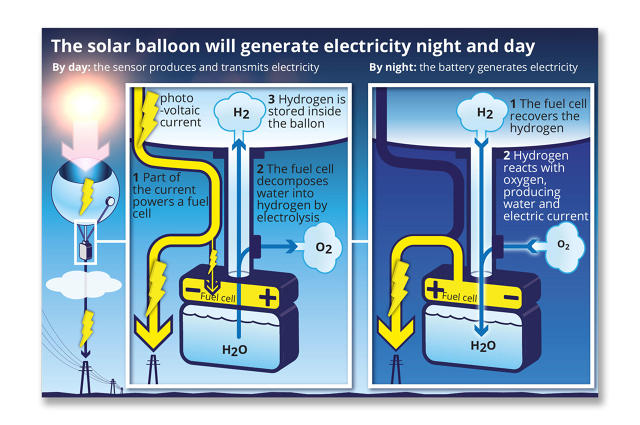 The system work by having the balloon capture the sun’s energy and sending it to a fuel cell, which will convert the current into hydrogen and keeps the balloon floating. When it is not in use at night, the cell will recover the hydrogen and convert it back into a charge, which feeds it down to the ground.

Guillemoles is collaborating with Japanese researchers to make this happen. Calling the team as NextPV, the collaboration seeks to produce a prototype within two years. Solar balloons, amazing!