Out of all the things we could find in science-fiction, the most iconic one has to be the hologram. They’re basically a staple for every work in the sci-fi genre. Scientists have been trying for years to make the fictional technology a reality. Unfortunately, they have always struggled with coming up with a hologram thin enough to work with modern electronics.

However, a team of Australian and Chinese scientists, led by Professor Min Gu from RMIT University, has finally been able to design a nanohologram thinner than a human hair. It can bee seen without any special eyewear, and most of all, is easy to create.

“Conventional computer-generated holograms are too big for electronic devices but our ultrathin hologram overcomes those size barriers,” said professor Gu. “Our nano-hologram is also fabricated using a simple and fast direct laser writing system, which makes our design suitable for large-scale uses and mass manufacture.”

“Integrating holography into everyday electronics would make screen size irrelevant – a pop-up 3D hologram can display a wealth of data that doesn’t neatly fit on a phone or watch. From medical diagnostics to education, data storage, defence and cyber security, 3D holography has the potential to transform a range of industries and this research brings that revolution one critical step closer,” He added.

The current hologram tech works by modulating the phase of light to give the illusion of 3 dimensional depth. But they have to be as thick as optical wavelengths to be able to generate enough phase shifts. Which is why it’s difficult to integrate in today’s modern devices like smartphones. 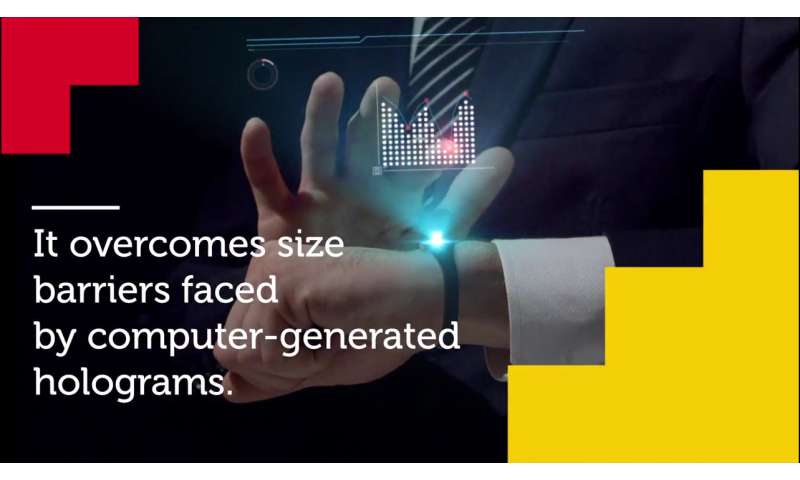 The research team, however, was able to surpass the thickness limit. They created a hologram, only 25 nanometers in width, based on a topological insulator material. This quantum material has a low refractive-index in the surface layer, but has an ultrahigh refractive index in the bulk. The insulator material is in a thin film that acts as an intrinsic optical resonant cavity. Therefore, it enhances the phase shifts for holographic imaging.

“The next stage for this research will be developing a rigid thin film that could be laid onto an LCD screen to enable 3D holographic display,” says Dr Zengyi Yue, co-author of the paper. “This involves shrinking our nano-hologram’s pixel size, making it at least 10 times smaller.But beyond that, we are looking to create flexible and elastic thin films that could be used on a whole range of surfaces, opening up the horizons of holographic applications.”