Patients who suffer from burn wounds and scars that can’t heal on their own only have 1 option: skin graft surgery. This can be very painful, and usually leads to several other complications, and it takes forever to actually heal.

However, RenovaCare has developed a new breakthrough piece of tech: CellMist, a gun that sprays stem cells into a patient’s burn wound, effectively allowing healthy skin to grow out of it.

It works literally like we described it as. Within 90 minutes of a patient being brought to the emergency room, they stem cells are isolated, processed, put in a liquid suspension, and then loaded into the CellMist gun. CellMist then gently sprays the stem cells onto the patient’s burn wound.

Tests conducted in Europe and the US have shown that new skin begins to regenerate as soon as 4 days after it’s been sprayed on patients, compared to skin grafting surgery which may take weeks of pain and possible infections.

So far, CellMist has only been used to treat second degree burns. However, evidence has shown that it can be used for other skin wounds and skin disorders. They don’t think it’ll work for third degree burns though, as this kind of burn wound has damaged the entire epidermis and dermis levels. CellMist isn’t advanced enough to heal such a deep burn wound, and victims would unfortunately have to stick to more traditional methods of treatment. First degree burn wounds on the other hand only barely touch the epidermis, meaning it can still heal on its own, thus not needing such an expensive piece of technology.

It is good to note that even though there is evidence that it might be able to heal things other than burns, CellMist wasn’t built to regenerate skin lost from other kinds of injuries or diseases. It’s also pretty limited, because as we stated earlier, it should be used immediately after the burn incident has occurred, or else it won’t work.

It’s still a pretty handy invention. The reason why skin grafting is so risky is because it involves cutting the skin open and leaving it open for 3-4 weeks. This means that nasty bacteria and fungi can easily get into the open wound within that time, causing several infections and complications. 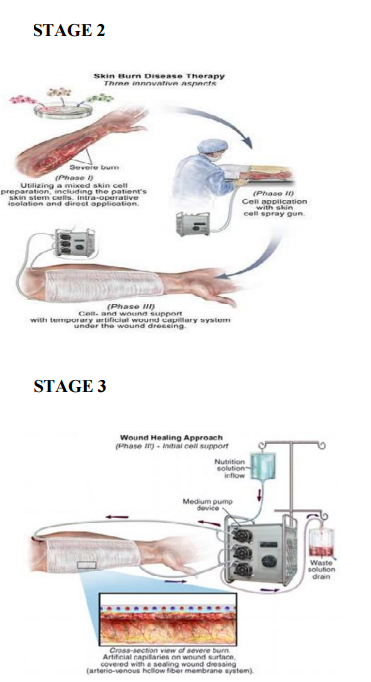 With CellMist, however, simply involves extracting a thin layer of the patient’s healthy skin and stem cells and turning it into a spray, and then distributing the stem cells into the burn wound evenly, without damaging other healthy skin cells. The healing time only takes a few days, so there is little chance for an infection to occur if treated properly. And since the patient’s own skin cells are used in the process, the regenerated skin looks much more natural, with only little scarring. The stem cells grow into fully functioning layers of skin, from the dermis, to the epidermis, to even blood vessels.

Hopefully, this cool new invention will make way for other forms of stem cell treatments for the reconstruction of other organs, like one’s heart and kidneys.