Two Swiss hospitals in the city of Lugano have devised a clever way to transport laboratory samples: drones. Since mid-March, the logistics company Swiss Post had successfully completed 70 test flights between the two hospitals, and they just announced their plans to establish a regular service route by 2018.

While this isn’t the first time drones have been used to transport medical samples from one place to another, Swiss Post has stated that this will be the first commercial deployment of these drones in an urban area. Transporting samples in busy cities and towns using drones have always been a challenge due to the risk of either civilian injury or the drone hitting an unexpected obstacle, but the Swiss Post had begun negotiating with Switzerland’s aviation regulators at FOCA since the test began to tackle this problem.

Using drones to deliver medical samples are just a perfect use for them. These samples are light, hence they don’t overburden the raft, and delivering these samples are often times time-sensitive, so it’s well worth the extra cost of using these drones over conventional transport; and in the urban city of Lugano, deliveries in this urban city will avoid getting caught in traffic, increasing the speed of delivery. 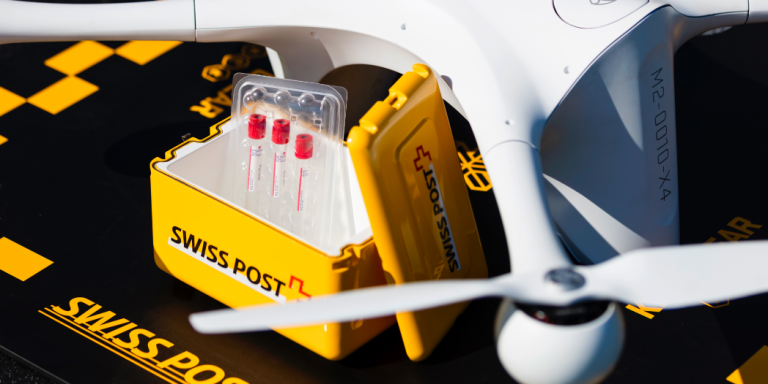 “The regular use of drones between the two hospitals will become an everyday occurrence,” said Swiss Post in a press release. “Trained hospital staff will be able to load the drone independently with a safety box (in which the lab samples are packaged) and launch the drone with a smartphone application. The drone will then fly autonomously along the predefined route to its destination, where the box will be received by another member of staff.”

The drones were created by the American company Matternet. They have a load capacity of up to 2 kilograms, have a range of 20 kilometers up in the air, and reaches speeds of up to 30 kilometers per hour. The drones use infrared sensors to guide their take-offs and landings, and lastly, they have built-in parachutes in case of emergency, to safely land the samples  to the ground.