Meet Nixie drone, a wrist mounted drone that you can wear like a watch. It can launch itself and take selfies and videos for you using its onboard camera.

Nixie was founded by two people, Christoph Kohstal a former postdoctoral physics researcher at Stanford and Jelena Jovanovic a former tech lead and manager at Google.

The Nixie drone has been called “The first wearable camera that can fly,” with its small camera you can wear like a watch, and then unfolds and turns into a flying quadcopter.

Nixie’s creator Christoph Kohstal, was able to create a functioning drone that can wrap around your wrist like a watch and launch itself into the sky with the use of flexible electronics. 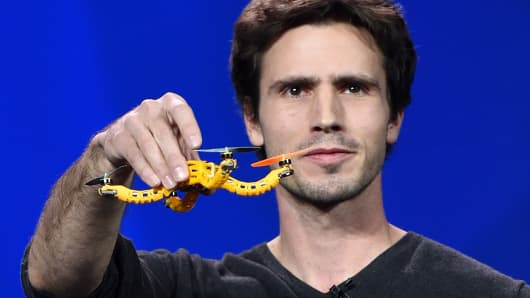 Nixie drone uses a tiny processor called the Intel Edison chip. Its size is similar to that of an SD card. With the help of these tiny electronics, Kohstal was able to build the drones arms which can wrap around the wrist.