For decades, the world’s strongest industrial nations have been discussing over who bears the greatest responsibility for carbon emissions. However, 47 of the world’s poorest countries have unified to work together and pledged to avoid using fossil fuels for good.

The members of the Climate Vulnerable Forum issued their statement at the Marrakech climate conference that was conducted on November 7 and 8, 2016 at Bab Ighli, Marrakech, Morocco. Bangladesh, Ethopia, and Haiti, among the other countries that they will be updating their national plans on cutting carbon before the year 2020. The delegates agreed on the idea and said that the idea was inspirational.

In an effort to show that even the world’s poorest countries are committed to solve the world’s problem of global warming, the Climate Vulnerable Forum (CVF) members have issued a promise to fully make use of 100% renewable energy between 2030 and 2050. They called this the Marrakech Vision.

According to BBC, this plan promises that the 47 members will: “strive to meet 100% domestic renewable energy production as rapidly as possible, while working to end energy poverty and protect water and food security, taking into consideration national circumstances”

The countries that are involved strongly support keeping the global temperature rise this century under 1.5C, which is a target that has been agreed upon during negotiations in Paris last year.

According to Mr Mattlan Zackhras, a minister from the Marshall Islands, “We are pioneering the transformation towards 100% renewable energy, but we want other countries to follow in our footsteps in order to evade catastrophic impacts we are experiencing through hurricanes, flooding and droughts,” 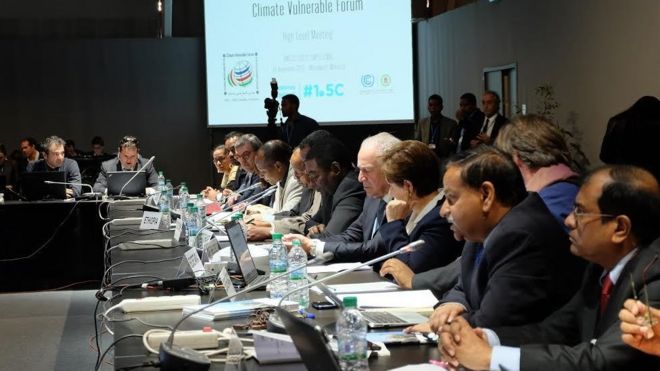 The countries involved in the CV also pledged that they would be updating their national climate-cutting plans before the year 2020 and that they will develop long-term plans as soon as possible.

“We don’t know what countries are still waiting for to move towards net carbon neutrality and 100% renewable energy,” Edgar Gutierrez, Costa Rica’s minister for the environment said. “All parties should start the transition, otherwise we will all suffer.”

The progress towards meeting these renewable energy goals will depend on the finance from richer countries. They promised that they will be contributing $100 billion a year from 2020, as agreed upon in the Paris climate agreement.

According to the EU climate commissioner, Miguel Arias Canete”The commitments made by the Climate Vulnerable Forum today are both impressive and inspirational,”

“They have once again shown their moral leadership in this process with real-world commitments to action. These countries are already living the terrifying reality of climate change today and their very existence is on the line. The EU stands with them and their commitment to greater ambition in the years ahead.”