Microsoft founder Bill Gates is a habitual reader. His being a bookworm has propelled him to learn from technical knowledge to management strategies even before his company rose to greatness. While it is not knew that he recommends books, Gates has a named a new one to share especially for budding engineering managers. He used to read similar books a long time ago that influenced his decisions later when Microsoft was growing.

“In the early days of Microsoft, I felt pretty confident about my coding skills, but I had a lot to learn about project management,” Gates wrote in a blog post on Gates Notes.

“This became abundantly clear after an incident in 1978, when I told Intel — a really important customer — that we would deliver them a version of Microsoft BASIC in four weeks. They thought I was crazy to promise it that fast, and it turned out that they were right. We were two weeks late.”

Needless to say that there was nothing he could do about that decision, but there was something he could to improve future commitments. And that is through the help of a big boss from Intel itself, former CEO and chairman Andy Grove who passed away in 2016.

Recollecting from his experiences with Grove, Gates said that the guy helped him hone his management skills, adding that he is “one of the great business leaders of the 20th century.”

Much of Grove’s ideals are based on management by objective, more popularly known as OKRs (objectives and key results). This management trick is currently being used by big companies such as Gates Foundation, Amazon, Google, and Netflix, among others.

That is now the inspiration of the book written by John Doerr, a former Intel employee and currently a venture capitalist at Kleiner, Perkins, Caufield & Byers.

Called the “Measure What Matters: How Google, Bono, and the Gates Foundation Rock the Work with OKRs,” it discusses “how OKRs work and shows how you can apply them in all sorts of situations,” according to Gates. He recommends it for “anyone in interested in becoming a better manager.”

Google co-founder Larry Page wrote the foreword of the book. He said, “I wish I had this book 19 years ago, when we founded Google.” 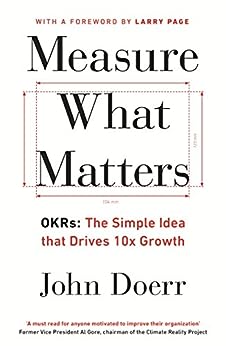 In a nutshell, OKRs are a management style that keeps the employees focused as well as on track. The objectives set the direction of the tasks while key results are the measurable achievements. More can be read about OKRs in this book recommendation of Gates.

As to the credibility of Doerr, he was able to get reviews from different big personalities in the tech industry including Facebook COO Sheryl Sandberg. In the book Amazon’s profile, she wrote that Doerr has “taught a generation of entrepreneurs and philanthropists that execution is everything.”