I’m a Left-Handed Engineer, So What?

Something is definitely wrong with the way people think about us southpaws. Most are “weirded” out by the fact that we do a lot of things with our left hands. What’s so weird about that? We don’t complain and react when the righties use their right hands. To the left-handed engineer out there, keep reading!!!

There is a limited set of responses (see graph) whenever people see us use our left hands. As a lefty this has become annoying, until I find myself another lefty that I can share my struggles with. 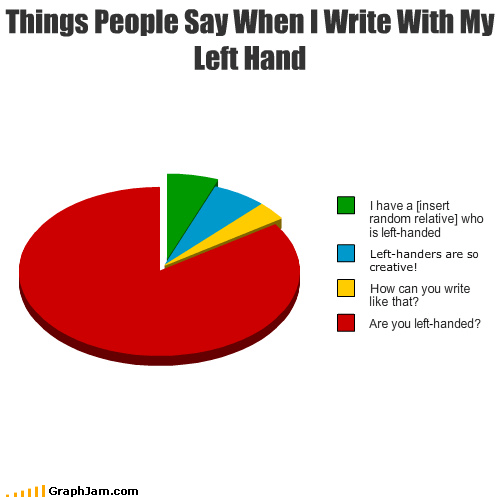 Despite the discrimination, there is something really special about being left-handed. Psychology says that being left-handed tend to have a higher IQ, more artistically inclined, more likely to be good in sports, and better at multi-tasking  than the right-handed.

This at least makes the lefties feel good among ourselves: we are more intelligent than the right-handed ones.

IQ tests conducted by St. Lawrence University found that there were more left-handed people with IQs over 140 than those individuals with dominant right hands. It didn’t mention anything about engineers though.

While this may contradict the fact that engineers deal more with science and mathematics, research showed that left-handed people may be more artistically inclined over the right-handed. A survey of over 2,000 left-handed people proved that most lefties get careers in art and music, including the greats Michelangelo, Raphael, and Rembrandt.

Now, we start to ask ourselves: are we in the wrong dimension? Should we be in art instead of engineering?

No need to fret because the great Leonardo da Vinci, the maker of renowned images Mona Lisa and Last Supper, is also inclined to architecture and sciences, and often referred himself to as an engineer. There is pride in that, somehow.

More likely to be good in sports

To lefty engineers who have tons of spare time, sports might be a good pastime. Left-handed people are believed to be good in a lot of sports.

Sportsmen Babe Ruth, Wayne Gretzky, Rafael Nadal, Manny Pacquiao, Larry Bird, James Harden, and Tim Tebow, among others are southpaws. If these non-engineers can excel in their respective sports, we can do so too because it is already innate to being a lefty.

The engineering job, by its very nature, is demanding to the point that we need to multitask effectively. If you are a lefty, then you should take advantage of that – lefties are known to be better at multi-tasking.

This comes from the fact that left-handed people are forced to think more quickly. This was discovered by researchers who found that conversations between the left and right sides of the brain happen more quickly in left-handed people. This way, it becomes easier to multi-task and deal with a large, sometimes unorganized stream of information.

Above all of these, we can also celebrate a special day just for us lefties. It is on August 13, called the International Left Handers’ Day, a day that we pride ourselves for being left-handed.

Amid the mentioned superior qualities are the downsides of being left-handed: easily scared, frequent drinkers, and possess higher risk of insomnia and psychosis.

A research presented at an annual conference of The British Psychological Society tells that people with dominant left hands tend to be more affected by fear more than people who use their right hands. They did an experiment which made a group of people watch an eight-minute clip from Silence of the Lambs. The lefties were far more likely to show signs of post-traumatic stress disorder than righties. (But come on, Silence of the lambs is indeed scary.)

Read more  The Next Engineer Billionaire Can Solve These Problems

A survey of more than 25,000 people from 12 countries concluded that left-handed people drink more frequently than their right-handed counterparts. It’s because the side of the brain the lefties usually use has a lower tolerance to alcohol.

Engineers indeed enjoy a couple of beers here and there after work. The lefties must be the ones calling the group to destress. Not a bad thing at all, I guess?

Yale University researchers concluded that around 40% of schizophrenic patients were left-handed, suggesting that brain laterality plays a role. It doesn’t have to be like that for engineers, hopefully.

But insomnia is pretty much part of the engineers’ system – pulling all-nighters is pretty normal. Psychosis isn’t, though.

In this world basically designed for and by the righties, we have these struggles that we encounter almost everyday.

Every lefty’s classroom enemy: the desks of the chairs.

The swipe of the credit and key cards is on the other side. Always.

You always bump elbows with righties in your class the whole time of your childhood. But you make a great friend to them anyway.

The crappy baseball mitt that is never left-handed. Ugh.

You wanted to mimic Jimi Hendrix, who is a southpaw, by the way, but you can’t. Your friends all have right-handed guitars.

You can never write on side-bound spiral notebooks without ever touching the spirals. It sucks.

You wanted to reach the numbers pad on the keyboard but it is too far away.