The Engineer Who Says “I Don’t Know” Has Better Decision...

Engineers at work are faced with so many problems that range from paper works to field work, may it be leadership, managerial or technical skills. Each time an engineer makes the decision to each problem, he or she should look for the most sound solution. And to this, experts say that you should not rush to it by saying “I already know.”

An experiment done by Mark Chussil, founder and CEO of Advanced Competitive Strategies, revealed that overconfidence is the best way to ruin your chances for making a good decision. He wrote, “When you think you know the answer, you sincerely believe it’s a waste of time to keep looking for it.” This kind of thinking eliminates time to think more of better solutions.

He also shared that those who simply said they didn’t know enough to make a decision were more likely to have positive outcomes. Another conclusion was that those who were confident about an immediate solution when presented with a problem were less successful.

What engineers can draw from this experiment is to take time in formulating decisions. Saying “I don’t know,” or “I don’t know yet” is simply buying more time to really think about a strategic and competitive solution. You can ask other engineers at work to consult rather than thinking on your own because newsflash: you don’t always hold the right answers.

Then there’s the engineers who make good competitive-strategy decisions, and those who don’t have any skills.

Read more  What Engineers Should Do When Faced With Overwhelming Tasks

It’s not easy to split engineers into the good/bad strategy decision-makers. Track records are useful but they’re not unambiguous, and those getting started have no track records at all. General intelligence and business degrees seem to be good signs, but smart engineers with business degrees don’t agree on what works in strategy. Veterans with specific industry expertise look promising, but so do outsiders with new ideas.

What about mindset? We know engineers put credence in confidence.

Imagine that we can record decision-makers’ solutions to a competitive-strategy problem skills. We also ask how confident they feel that they’ve found a good answer and how long it took them to find it. We can categorize them, then, like this: 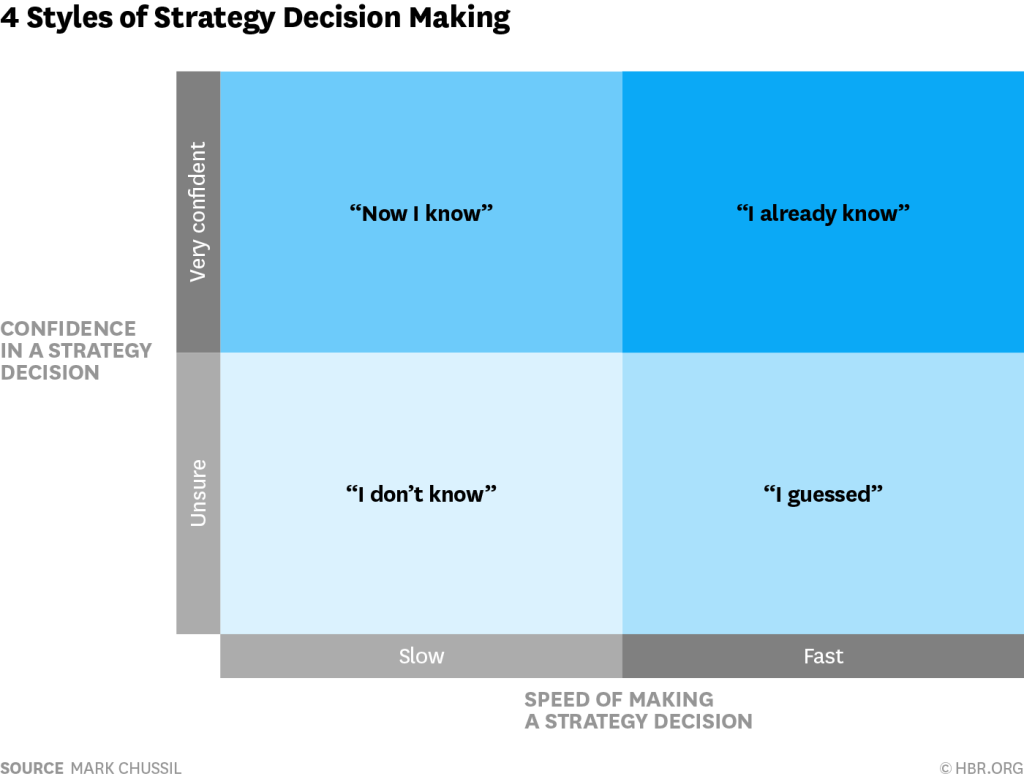 I’ve got such a database of engineers, those who have entered the Top Pricer Tournament. The database includes business executives, consultants, professors, and students. I gave all of them the same unfamiliar but straightforward pricing-strategy problem.

The phrases in the boxes are how I interpret the mindsets of the engineers in those boxes. In the analysis below I’ll leave out the respondents in the “I guessed” box because they seem unrepresentative of what happens in real life, where strategists work at strategy decisions until they’re confident in their answers or they’ve worked long enough to conclude they’re not going to make further progress.

In general, the I-already-knows, confident in their snap judgments, and the Now-I-knows, confident after pondering, tend to be older males. Male business students are also represented in the I-already-knows. The I-don’t-knows, unsure of their thoughtful decisions, tend to be somewhat younger. And females make up well over half of the I-don’t-knows, a much higher percentage than in the other mindsets.

Make your prediction: which of the three styles selected the best-performing Tournament strategies?

The best-performing group: the I-don’t-knows.

In one case, the new vice president of a troubled business brought together about thirty managers, each with decades in the business. The managers considered the war game an amusing waste of time.

They all knew the answer already, they said, and no other options were possible. Then, role-playing their business and its competitors, they discovered that their already-known answer simply would not work. The manag­ers suddenly found new options. We war-gamed one, and it worked, and they rolled it out in real life, and it worked. The new VP got promoted.

It’s not that the managers didn’t care or were incompetent; it’s that they were overconfident. When you think you know the answer, you sincerely believe it’s a waste of time to keep looking for it. It feels like continuing to search for your keys after you’ve found them.

I think the essential lesson for competitive-strategy decision-makers is not so fast, in both senses of the phrase: take your time and don’t be so sure. That’s the mindset used by the new VP and the I-don’t-knows.

The willingness to apply that mindset is what separates the good decision-makers from the bad.