An Engineering Student Designed this Airplane While Drunk

We’ve heard of stories about drunk engineering students acing their exams. They can be amusing tales at times, but this story will amaze you. This US college student was able to design an entire plane while he was very drunk. While most engineering students have a hard time passing their majors, this guy easily designed a high-speed plane in one night.

Keith and Mark were just average students studying at Michigan Tech College until one night, Mark went home to his dorm room very drunk, designed a plane but woke up with no idea what happened the other night. Luckily for him, Keith had proof of his roommate’s drunken state of brilliance, He tweeted about the things that happened that night. 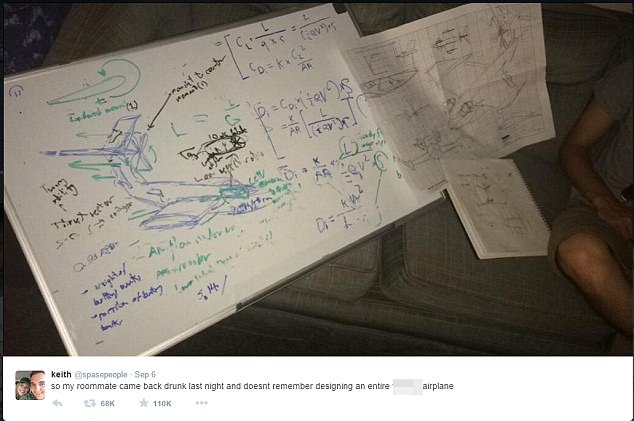 According to Keith, Mark got drunk over vodka and rum, then reached out for his textbooks as soon as he arrived in their room. He then tweeted a photo of his roommate’s work with the caption:

“So my roommate came back last night and doesnt remember designing an entire f****** airplane.”

Alcohol does have a way of making people popular. Keith’s tweet went viral afterwards. With over 64,000 retweets and 110,000 favorites, Mark became popular with his stint. Mark even made plans to pursue his new project by working on his design further and creating a remote-control model.

Aside from Keith, Mark’s drinking buddies that night witnessed him design his airplane, asking for a pen and paper and working on the ground. Later on, he grabbed his aerospace mathematics book and left the room to go back his place. All of Mark’s designs were written on a notepad, a whiteboard and a graphic paper.

When asked if his design would work, Mark said that it may work and clarified that what he designed was an ekranoplan, a high speed aircraft that can float above water.

Mark just proved that something productive and very amusing can come out from getting drunk. This definitely classifies as drunk engineering students #drunkgoals.